After getting laid off as a highly-paid programmer at a startup I had the good fortune (??) to land another job within 2 weeks. It was a three month contract at another startup company in a high-rise downtown. The pay was much less and I had no benefits – but I had to take it or lose my unemployment checks. Despite the circumstances, they saw fit to assign me the title “Senior Sofware Consultant” – a bullshit title if I’ve ever heard one. On my first day, I arrived promptly at 8:30 and they had: no desk, no chair, no computer, and nothing for me to do. My new boss was out of the office.

Feeling less than welcome, I spent the first few hours putting my Senior Software Consultant skills to work with the the office manager (a rarely helpful, frequently interrupted, and psychotically perky woman in her 40s – you know the type) removing my desk from a cardboard box and putting it together with a hex-wrench. When I was finished, they had me watch someone else program who was very annoyed at my unexpected presence and much too busy to explain anything. My first day ended with me being introduced by some manager in a department-wide meeting as “our new programming resource”.

When I showed up the next day they had put my rolling mini-desk in a busy little hallway sandwiched between two cubes. No desk had been in that location before. Consequently, as people walked around the corner during the course of the day, I was collided with no less than five times and endured endless, inane and consistantly smirky “Oh, look where they have you!”-type comments. The two cubes on either side of me were occupied by none other than my boss…and his boss. 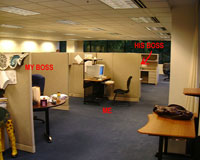 Clicky for bigness
This entry was written on September 17th, 2009 by Cubed00d and filed under General, New Guy.
Tags: desk
RSS 2.0 | Trackback.

12 Responses to “Worst Desk Location Ever”

Want to Leave a Reply?